It turns out that mountains and volcanoes are abundant throughout our solar system.

What is even more interesting is that only one mountain on earth makes the top 10 list of our solar system’s highest mountains. It’s number 10, and it is not Mt. Everest!

The highest mountain in our solar system is found on neighboring Mars: Olympus Mons at 15.5 miles high dwarfs Mt. Everest by a factor of 5, and Earth’s actual highest peak, Mauna Loa, by a factor of about 3 (5.7 miles). Astonishingly, Mars is home to 4 more mountains and volcanoes from the list mentioned above.

Vesta’s neighbor, the dwarf planet Ceres, is home to Ahuna Mons, a cryovolcano. Although this peak doesn’t come close to making the top 10 list, it is still an impressive sight! 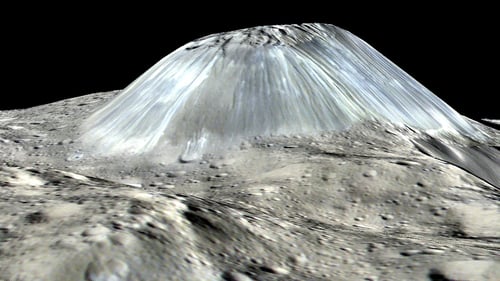 Ceres is of interest to scientists for several reasons. It appears that this heavily cratered dwarf, just 585 miles in diameter, shares some characteristics with the terrestrial planets (Mercury, Venus, Earth and Mars). For example, it has an inner core and a mantle (or “crust”), but its mantle is likely to be composed of space ice. This significant feature will be explained below. (Ceres also has the distinction of being the first dwarf planet to be orbited by a spacecraft, Dawn.)

It is Jupiter’s moon, Io, which holds a different record: the highest number of active volcanoes in the solar system: 400 of them with as many as 150 of them active at the same time.

Planetary geologist, Rosaly Lopes, knows all about them. As explained in Quanta Magazine, she holds a record of her own:

As a planetary geologist at NASA’s Jet Propulsion Laboratory (JPL), she analyzed images from the Galileo mission to Jupiter, identifying 71 active volcanoes on Io—a feat for which she has been recognized with a Guinness World Record. 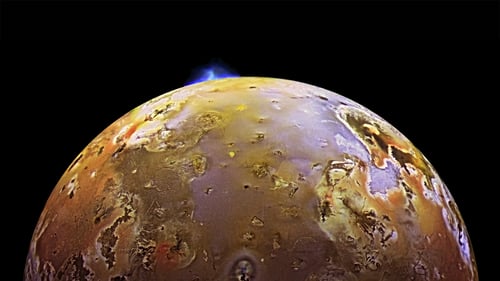 Lopes explained why we want to study these other-worldly mountains and volcanoes:

“Many exoplanets are thought to be super-Ios, where volcanism is still occurring on a large scale thanks to tidal heating. And many exoplanets are also thought to be ocean worlds. Those two characteristics bring about the possibility that life could have evolved there, since you have two of the necessary ingredients: heat and water.”

She is not talking about intelligent life (as in aliens). Dr. Lopes means biological life, possibly microbes or bacteria.

Studying geological processes on other planets–and asteroids–can help us understand the formation and evolution of our own planet. As we gaze into the heavens, the intricacies and precision of these processes should inspire awe and wonder—and gratitude to the One who spoke it into existence.

Gazing at the heavens has fostered wonder, curiosity, and inspiration since ancient days. Noticing the changing movement of the ...
Start Reading
Maggie Ciskanik, M.S., MSc. Nov 24, 2021 11:00:00 AM 4 min read

Appearing once again in the morning sky, Mars is visible just before sunrise from October to December. While this might be of ...
Start Reading