The First 100 Days of the James Webb Space Telescope

The First 100 Days of the James Webb Space Telescope: Still Delighting Us and Delivering Impressive Data

What makes us human is to be curious and to push boundaries and explore and increase our understanding of the universe. JWST is the next piece of that puzzle. —Natasha Batalha

In early September, the JWST’s Near Infrared Camera (NIRCam) revealed its first image of an exoplanet. Named HIP 65426 b, this gas giant is six to twelve times larger than Jupiter. It is 100 times farther away from its host star than Earth is from the sun and is relatively young by comparison–only 15-20 million years old. Discovered by land based telescopes in Chile back in 2017, the new image reveals more details and data for scientists to explore.

University of Exeter’s Sasha Hinkley, who led the international collaborative effort to obtain these images, called it a “transformative moment” for astronomy. She expressed satisfaction with how well the NIRCam and MIRI coronographs worked. Coronographs are small masks that block the brilliant light of host stars, which in the image are indicated by the white star. Each image represents a different bandwidth as described under the image. 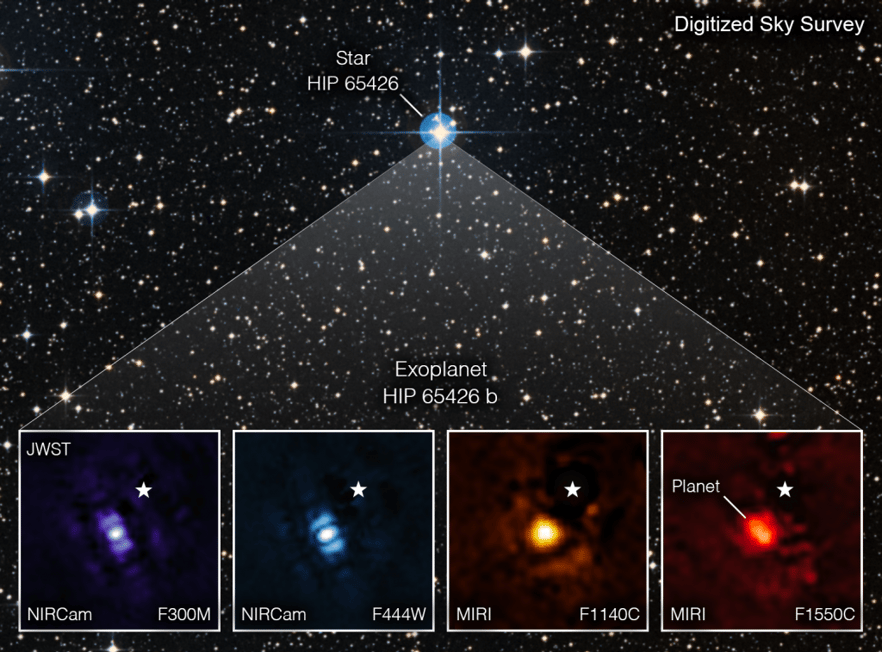 Exoplanet HIP 65426 b in different bands of infrared light, as seen from the James Webb Space Telescope.
Image Credit: NASA/ESA/CSA, A Carter (UCSC), the ERS 1386 team, and A. Pagan (STScI).

More Details of the Early Universe from Galaxy MACS0647-JD

Dan Coe of AURA/STScI for the European Space Agency and Johns Hopkins University discovered a galaxy 10 years ago in a Hubble Space Telescope image. It is known as MACS0647-JD. He recalls:

At the time, I’d never worked on high redshift galaxies, and then I found this one that was potentially the most distant at redshift 11, about 97 percent of the way back to the big bang. With Hubble, it was just this pale, red dot. We could tell it was really small, just a tiny galaxy in the first 400 million years of the universe.

The images from JWST, however, tell a very different story: that “galaxy” is actually two objects! Whether they are two galaxies or two clusters of stars in one galaxy is under investigation. Tiger Hsiao of Johns Hopkins University commented about the different colors of the two objects:

One’s bluer; the other one is redder. The blue gas and the red gas have different characteristics. The blue one actually has very young star formation and almost no dust, but the small, red object has more dust inside, and is older. And their stellar masses are also probably different. The team hopes to study the physical properties of this distant galaxy using the JWST spectroscopy instruments in the near future. For Rebecca Larson of the University of Texas at Austin, the most amazing thing is that “this is only the beginning!”

I think my favorite part is…. if you look in the background, there are all these little dots—and those are all galaxies! Every single one of them. It’s amazing the amount of information that we’re getting that we just weren’t able to see before. And this is not a deep field [image].

With near-infrared light from Webb and ultraviolet and visible light from Hubble, details of the effects of interstellar dust on a spiral galaxy were revealed by tracing light from the nearby elliptical galaxy. “We got more than we bargained for,” stated Rogier Windhorst, from Arizona State University and Webb interdisciplinary scientist.

Understanding where dust is present in galaxies is important, because dust changes the brightness and colors that appear in images of the galaxies. Dust grains are partially responsible for the formation of new stars and planets, so we are always seeking to identify their presence for further studies.

The combined data from this Dynamic Duo included a second discovery: a faint red arc appearing in two locations around the elliptical galaxy indicates the presence of another more distant galaxy through gravitational lensing. This is a significant discovery since, according to Windhorst:

Simulations of gravitationally lensed galaxies like this help us reconstruct how much mass is in individual stars, along with how much dark matter is in the core of this galaxy.

In addition to the images and discoveries mentioned above, Webb has trained its instruments on Jupiter, Mars, and Neptune, giving us images and information about our closer neighbors. The haunting image of Neptune, looking like a fragile glass ornament suspended against a black velvet background, is a vivid reminder of how our understanding of even familiar objects can grow and change when given the opportunity to view them through a new lens. 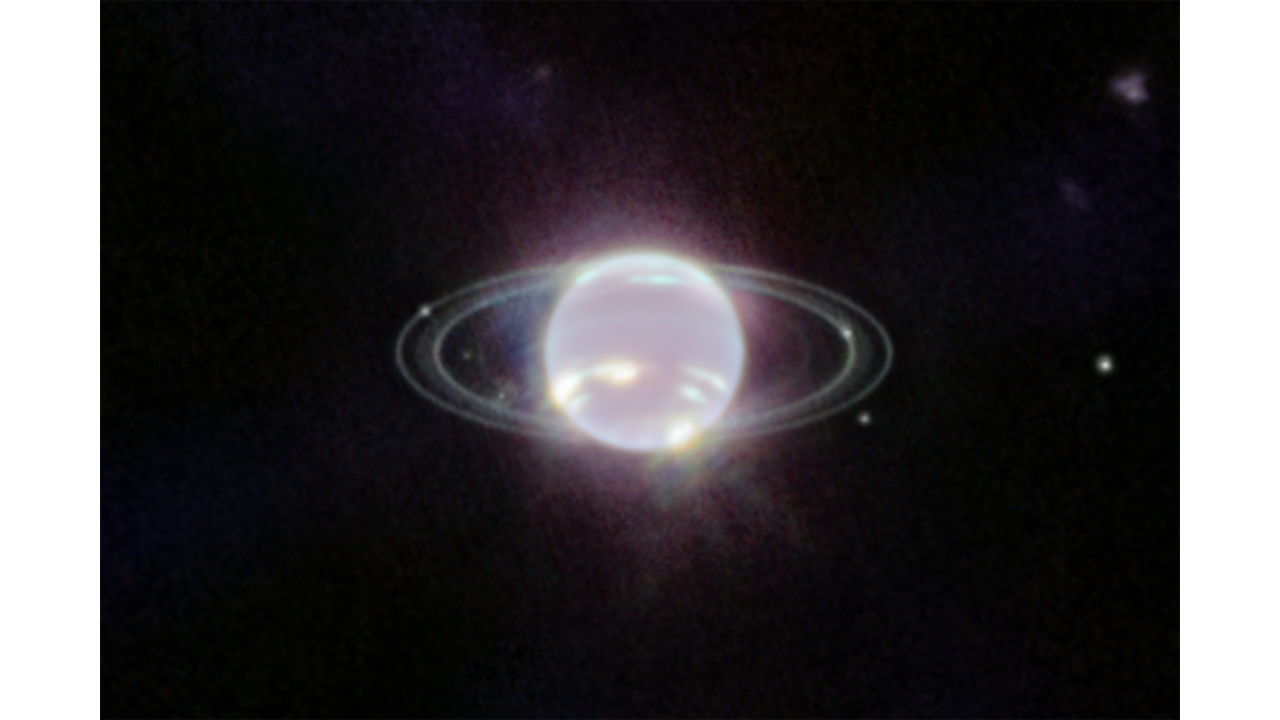 The first 100 days are an exhilarating start but are just a scratch on the surface of 20 more years of data collection. Exciting times are ahead indeed!

For a quick summary of the first 100 days, this video includes more images and information.

The James Webb Space Telescope is an unprecedented mission that is on the precipice of seeing the light from the first galaxies ...
Start Reading
Maggie Ciskanik, M.S., MSc. Nov 17, 2021 11:00:00 AM 4 min read

Gazing at the heavens has fostered wonder, curiosity, and inspiration since ancient days. Noticing the changing movement of the ...
Start Reading